Nintendo Announces The 2DS, A Slate-Like 3DS Without 3D 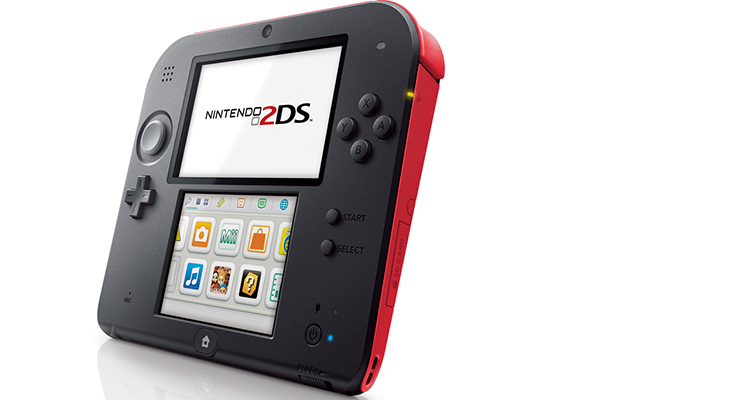 Nintendo recently announced a new line of handheld gaming consoles, called the 2DS. The company decided to release the 2DS due to the fledgling sales of the 3DS.

One of the reasons why the sales of the 3DS have been disappointing so far, is the fact that the console, which is supposed to allow you to play your games in 3D, isn’t working as expected. The console can’t be played by children under the age of seven, because the 3D feature can create future eye issues for kids that young.

By not being able to market and sell the 3DS to young kids, Nintendo is missing out on a demographic that can help them generate a lot of revenue. Despite the fact that the 3DS is out selling its counterpart, the PlayStation Vita, Nintendo feels that it should be doing better.

With the Nintendo 2DS, there are no 3D restrictions for younger kids, which should help boost the sales of the new console. The company also made the 2DS compatible with the games on the 3DS and the Nintendo DS, which means users can save money on buying games if they already have them on the other consoles.

The 2DS comes with a new design, and offers some pretty good benefits. One of the benefits of the 2DS is its price. Nintendo’s suggested retail price of the console is $129.99, which is significantly cheaper than the PlayStation Vita, which retails for $199.99.

By keeping the price low, Nintendo is putting themselves in a great position to keep generating more sales than the Vita, which a lot of people feel is too expensive, which is why the unit hasn’t been very successful.

The lower price of the 2DS benefits young adults who are buying the console for themselves, and parents who are buying it for their kids, because they won’t feel like they are getting ripped off because it is still cheaper than most electronics that they have to buy these days.

While Nintendo expects to make a lot of money with the 2DS, it might have a negative impact on the 3DS. Yes, there will still be people who appreciate the fact that they can enjoy their games in 3D, but game developers will have to reconsider their strategy. If it costs a game developer more money to create a game in 3D, there is no point in continuing doing so, especially if the 2DS is more successful than the 3DS. This will force gamers to abandon the 3DS for the 2DS.

The 2DS is poised to be the next big thing when it comes to handheld consoles, but only time will tell just how successful it will be.

Portable
About the Author
Nick Saban

Nick is a social and community editor for news. He spends his time figuring out how to involve readers better in our journalism, and trying to ensure we cover the topics and angles they want us to cover. He also writes about politics, books, music, film, technology and cycling.
You might also like
Portable

Portable gaming has always had a charm about itself, right from the days of original Nintendo Game Boy. With portable gaming devices, the gaming is not just restricted to your living room. With passage of time, the handheld gaming devices have evolved quite significantly, and the quality of graphics that these devices can support these […]

Nvidia recently launched its second-generation shield tablet, and from what we’ve seen, it is a big upgrade over the previous version. Unlike the previous Shield tablet which came with its own controller, the latest model comes by itself, which means you have to pay for the controller separately. From the performance we have seen from […]

After the success that they had with the Wii, Nintendo was expecting something similar with the release of the Wii U. Unfortunately, the Wii U hasn’t come close to achieving the success of its predecessor. The disappointing sales figures of the Wii U led to the company turning their focus on another product, the Nintendo […]